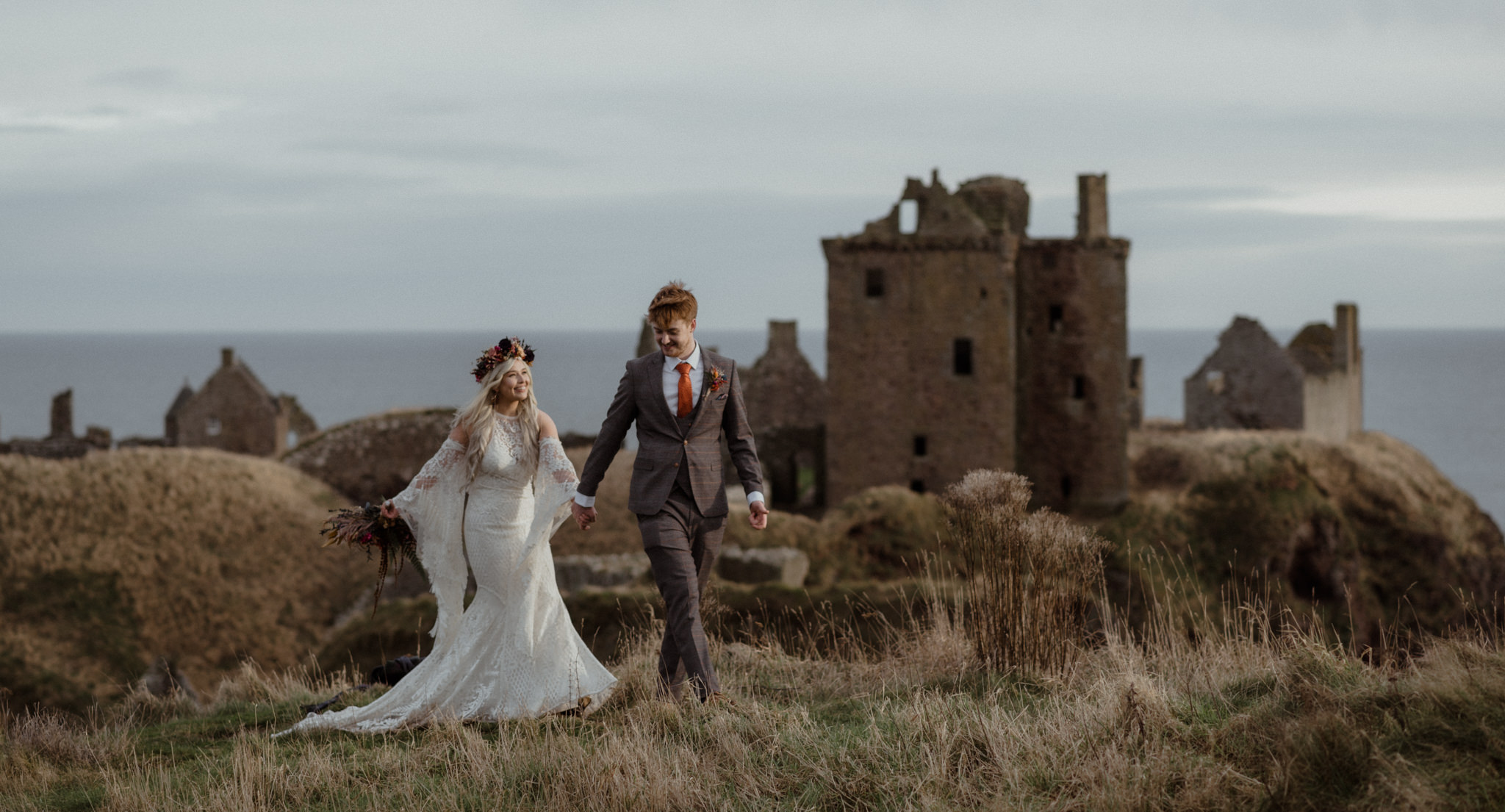 Nicole and Henry’s romantic and bohemian Scottish elopement wedding at Dunnottar Castle unfolded like something straight out of a fairytale. When we first spoke with these guys, and heard the super-sweet story behind how they met, we knew that they were going to be really fun to work with. We loved everything about this elopement wedding day: from Nicole’s beautifully boho dress, to the dramatic cliff top location that they chose for their humanist wedding ceremony, to their fire-side ‘first dance’ in a 16th century great hall surrounded by candles—followed by homemade cake—before finishing their evening sipping Champagne in a hot tub under the stars. Nicole and Henry really made their elopement wedding day their own. Read on for the full story of their magical winter elopement in Scotland.

Nicole and Henry chose the atmospheric setting of Balbegno Castle in Aberdeenshire as the base for their elopement wedding day—a grand house and tower, steeped in history and yet very homely. We loved the characterful interior with lots of intriguing details, and beautiful windows that flood each of the rooms in natural light (great for ‘getting ready photos’). It was the perfect backdrop for their peaceful morning preparations.

Nicole and Henry had chosen to do things the ‘traditional way’—sleeping in separate rooms the night before their wedding day. In the morning, they got ready separately before having a romantic ‘first look’ outside Balbegno, when they were all dressed-up and looking amazing in their wedding clothes, before departing for their ceremony location at Dunnottar Castle.

We love to capture the early morning moments of an elopement wedding day: the light is soft, and there is a sense of excitement and anticipation in the air. We’re also now very good at tying ties, pinning-on buttonholes and helping with dresses! It’s also a really nice way for us to relax into the rhythm and atmosphere of a couple’s day, and for them to get comfortable around us and our cameras!

Nicole and Henry went for a Scottish winter wedding, choosing to elope to Scotland in January. Scotland’s landscape can have quite a muted colour palette in winter, so Nicole opted for vibrant flowers in jewel tones to really ‘pop’ out against the highland backdrop. They perfectly complemented her amazing hippy-luxe dress with beautiful tassel and lace details.

Nicole and Henry’s love story started back in 2019 in Thailand, and it’s one that could be straight out of a movie. Nicole is American, Henry is from the north of England. They were both solo travelling in a remote, off-the-beaten-track region of Thailand—and, somehow, both arrived on the same day at the same youth hostel. Nicole had been wearing a ‘pretend’ engagement ring, to ward-off any unwanted attention during her travels, but the minute she saw Henry across the room, she slipped the ring off and put it in her pocket, saying to herself: ‘I think I would quite like to kiss that guy tonight…’ When they got talking, and Nicole clocked Henry’s English accent, well, that was it! They talked about everything and anything long into the night (much to the annoyance of their fellow roommates) and by morning they’d become an inseparable team.

After returning from their travels in Thailand, it was back to reality and a long distance, transatlantic relationship. Then Covid hit. Nicole was in the UK, and they found themselves unexpectedly locked down together (with Henry’s family!) Their romance blossomed, and living together 24/ 7 only confirmed what they knew already: that they were ready to tie-the-knot.

Their first look moment was one of the sweetest we have ever captured. The pure joy and excitement on their faces at the prospect of marrying each other was so beautiful to see.

Nicole and Henry chose Dunnottar Castle in Aberdeenshire as their elopement wedding ceremony location. Perched in a commanding position overlooking the sea, it has to be one of the most wildly romantic places to elope in Scotland. It’s a place that feels steeped in history, and you can’t help but imagine all the wedding ceremonies that must have taken place before: lives well-lived and well-loved and eventually becoming one with the elements. There is something uplifting, powerful and humbling, all at once, about this place—and it’s palpable sense of the cycle of history.

One of the things that we love about humanist ceremonies is that you can completely personalise them: including poems, texts or writings that are meaningful to you. Nicole and Henry invited their parents and grandparents to write something to be read aloud during their ceremony, which was a really special addition. In part, what they wrote was an expression of love for Nicole and Henry and the wonderful individuals (and amazing couple) that they had become. It was also words of wisdom for a long and happy marriage… Their beautiful words made for fond laughter and tears all at once!

Nicole and Henry chose to include a Scottish ‘hand-fasting’ into their elopement ceremony. A hand-fasting ceremony uses ribbon, lace or rope to bind the couple’s hands together. It symbolises the joining together of two lives, and it’s from this that we get the phrase ‘tie-the-knot’:

“These are the hands of your best friend, young and strong and full of love for you, that are holding yours on your wedding day, as you promise to love each other today, tomorrow, and forever. These are the hands that will work alongside yours, as together you build your future. The hands that will love you and cherish you through the years, and with the slightest touch, will comfort you like no other.

After their elopement wedding ceremony, Nicole and Henry were keen to go exploring and see some more of the Scottish Highlands. So we headed over to a neighbouring glen, which we had recced the previous day, to explore some scenic spots and capture some relaxed and natural photos en route. We always enjoy spending post-ceremony time with our couples, it’s when they’re at their most relaxed as the ‘important bit’ has been done, and they’re totally free to have fun, enjoy Scotland’s amazing landscape and spend some quiet moments with each other.

As the sun set, we headed back to Nicole and Henry’s cosy accommodation for some evening celebrations. Nicole (an excellent baker) had prepared their wedding cake and the kind owners of Balbegno had left some champagne chilling on ice. With the fires stoked, the candles lit, and music playing, Nicole and Henry enjoyed a super-romantic ’first dance’ in the incredible atmospheric great hall.

As darkness fell, Nicole and Henry stepped out into the chilly night air to end their evening with champagne and a hot tub under the stars. It was a clear night with the softest wind and the brightest moon—a beautiful, simple and peaceful end to a magical elopement wedding day.

If you are thinking about eloping in Scotland or are in the process of planning your Scottish elopement wedding, do get in touch! We would love to hear from you!

Just came across this blog as I was looking for some inspiration for elopement I’m lucky enough to document later this year. And oh boy, that’s inspiring!

Hi Erica! So exciting that you are considering eloping in Scotland! If you would like to head over to the Contact form on our website & give us a few more details, we can send you our brochure and some more info. It really helps us to stay organised if we have all of our enquires in one place. Thanks so much!

What an absolutely gorgeous photoshoot for a gorgeous couple.
We were honoured when Nicole and Henry chose us to help with their celebration and elopement.
Your photos really capture the magic and pure love of these two.
Thank you
Leah xx

We’ve been thinking of eloping in Scotland, and this absolutely epitomises all the romance of a Scottish elopement wedding. A beautiful day beautifully captured. Amazing work!

What an absolutely stunning elopement wedding! It has such a fairytale quality. the Scottish Highlands certainly come into their own in winter and Dunnottar Castle looks like such a romantic setting for a ceremony. All the emotions are so beautifully captured, too!

What a breathtaking fairy tale!! So beautiful and magical!! Both of you!! Congratulations!!

Absolutely stunning. I can not explain my emotions. Just absolutely breathtaking. Beautiful wedding and beautiful bride. Handsome groom. I wish you both the very best. Congratulations!