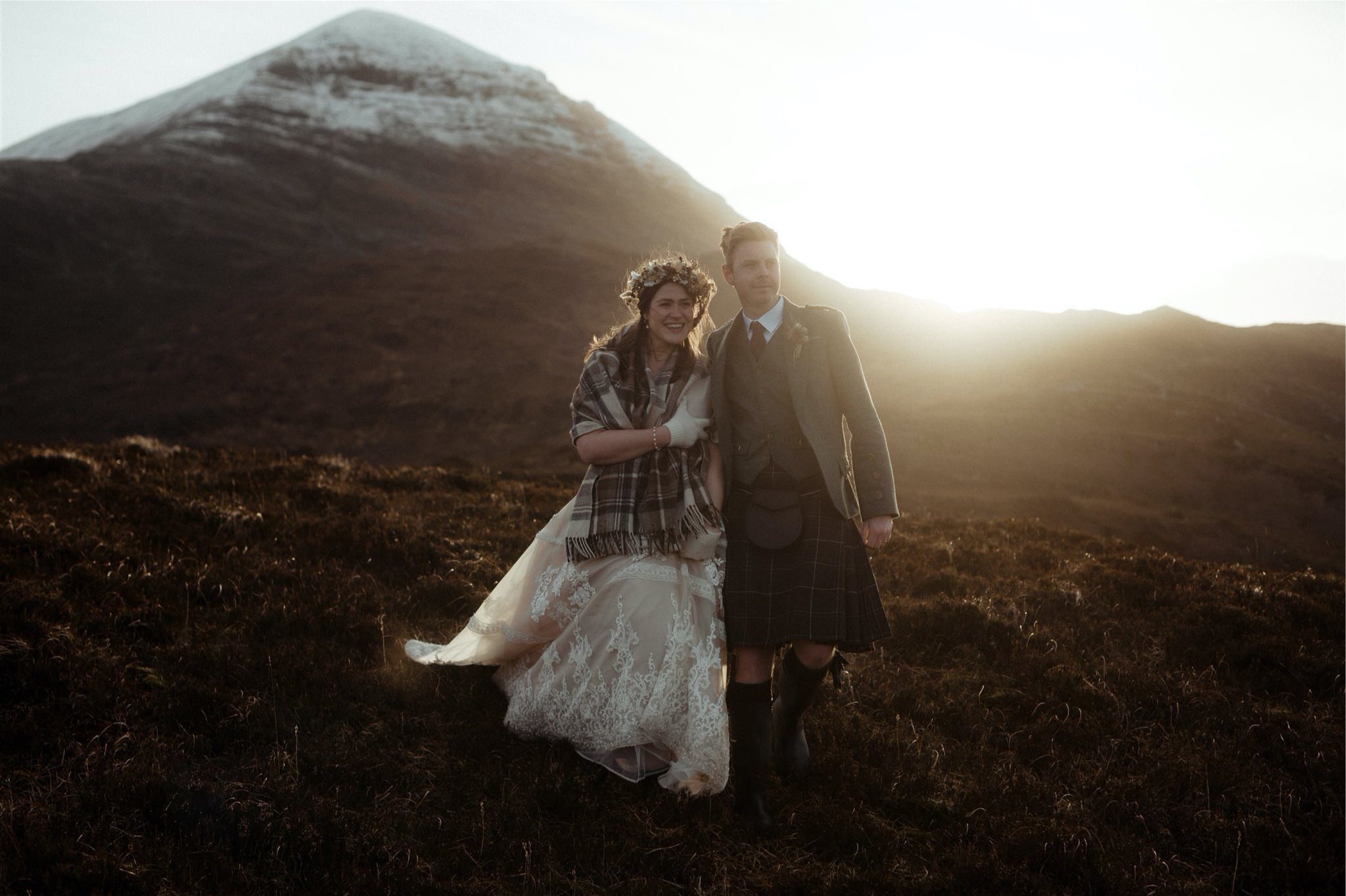 Kat and Stuart’s mountain elopement wedding in Scotland really captured their fun-loving personalities, their adventurous spirits and their love of the outdoors. For a couple who got engaged atop a volcano in New Zealand, an outdoor wedding ceremony surrounded by the wild and rugged landscape of the Scottish Highlands felt like a natural fit. That being said, an elopement wedding wasn’t their original plan… Like so many couples, Kat & Stuart’s original wedding plans were disrupted by Covid, not once…not twice, but three times. By the time they settled on eloping in Scotland — just the two of them — in a stunning and remote area of Assynt, it was their Plan D.

We have so much respect and admiration for these guys, who never lost sight of what really mattered (they were marrying each other) and were determined to make their wedding day completely *awesome* whenever and wherever it took place. From the moment that we arrived at their amazing cottage overlooking the sea, it became clear that Plan D was definitely going to prove to be The Best Plan! The day that unfolded was one of the most amazing elopement adventures that we’ve had the honour of witnessing set against a stunning Scottish mountain backdrop that completely took our breath away.

Kat and Stuart’s day began quietly as they both got ready for their elopement wedding ceremony. Kat did her own hair and make-up (with great results!) and her stunning flower crown from Wild Gorse completed her beautiful boho bridal look, while Stuart chose a traditional Scottish formal dress in his family tartan. They chose to get ready separately, before having a ‘first look’ moment outside their cottage — all dressed-up and ready to go in their wedding finery. We find that separate morning preparations and a fun ‘first look’ really adds to the anticipation and excitement of an elopement wedding day. Think of it as your equivalent to that ‘walking down the aisle’ moment at a traditional wedding…

Kat and Stuart chose March as the month for their Scottish elopement wedding. March is a bit of a wild child month here in Scotland, especially in places that are quite far north like Assynt. They came prepared to experience the proverbial four seasons in one day, and that’s exactly what they got! There was sunshine, showers, snow and wind. The crazy weather definitely added to the excitement, drama and adventurous nature of their wedding day!

Kat and Stuart had experienced so many up’s and down’s with re-scheduling, re-planning and finally entirely re-visioning their wedding day. We knew that when the moment finally came to say ‘I do’, it was going to feel extra-specially emotional. The fact that they were able to exchange their vows in a stunningly beautiful and uplifting natural setting only added to the power of the moment.

Kat and Stuart described themselves as “disturbingly similar and polar opposites at the same time”, which was definitely reflected in their vows to each other. Although they had written their vows in advance, separately and in secret, they ended-up being almost exactly the same! It was an incredible reflection of how perfectly in-tune and how well-suited they are for each other.

After their ceremony it was time to do some exploring! We loved how fun and game for an adventure these two were! Having the time and space in your elopement wedding day to seek-out some cool spots — don’t worry, we’ll always have recced them in advance! This is not only a really enjoyable way to spend some time, it also makes for really relaxed, spontaneous and un-posed photographs that really capture your individual personalities and your unique and special dynamic as a couple.

One major advantage of choosing the winter months for your elopement wedding in Scotland is that (outside Christmas and New Year) everywhere is much quieter. You’ll have the pick of the nicest accommodation, and the roads and mountains largely to yourselves. Plus, you’re likely to get snow on the hills and amazingly atmospheric low light. We have to say, we really love capturing winter elopements in Scotland! If you look closely, can you spot Kat and Stuart on the bridge..?

After spending a couple of hours exploring, we headed back to Kat & Stuart’s accommodation to warm-up in front of the fire and enjoy a late lunch. They had invited friends and family to write them a card to open on their elopement wedding day, which is a great way to include loved ones in your elopement if they are not going to be there in person.

After lunch, we headed out to catch the last rays of sun and see some more of the area. We hardly saw a soul! The only onlookers were some curious sheep. Being able to capture a couple’s love amidst the landscape is absolutely our favourite thing. Assynt really stole our hearts with its off-the-beaten-track beauty. We would definitely encourage couples who are drawn to the rugged drama of Skye or Glencoe to consider an elopement wedding in Assynt as a more peaceful alternative to these popular spots.

The day ended with champagne on the terrace gazing-out over the amazing sea view. The whole atmosphere of Kat and Stuart’s elopement day was just so calm and peaceful. No rush. No stress. No rigid timetable. Just lots of space within the day to be present in the moment, enjoy every aspect of the day and just soak it all in. This sense of time and space within the day is probably one of the biggest differences that we notice between an elopement wedding and a large-scale traditional wedding day (which usually run to a tight schedule and have a lot to pack into the day… which can end-up feeling quite rushed and stressful for the couple!) This is definitely something to think about if you are currently on the fence about whether to elope or whether to have a more traditional wedding…

As the sunset over the sea, turning the sky an amazing array of colours, Kat & Stuart made their way up a firepit on their neighbouring hill, where Stuart’s excellent fire-starting skills got a blaze going in no time. As their elopement wedding day drew to a close, they enjoyed a dram of whisky whilst glow of the fire fended-off the chill evening air. The only sound was the call of the gulls and the crackle of logs as Kat and Stuart let the just-married feeling sink in. Then we left them to enjoy a romantic dinner for two in their cottage and cosy-up for a night by the fire.

If Kat and Stuart’s awesome Assynt elopement adventure has inspired you to plan a similarly adventurous wedding day, do get in touch! We would love to help you to create a beautiful Scottish elopement wedding that’s just right for you!

The Best Places to Elope in Scotland: Our guide to the most romantic Scottish elopement locations