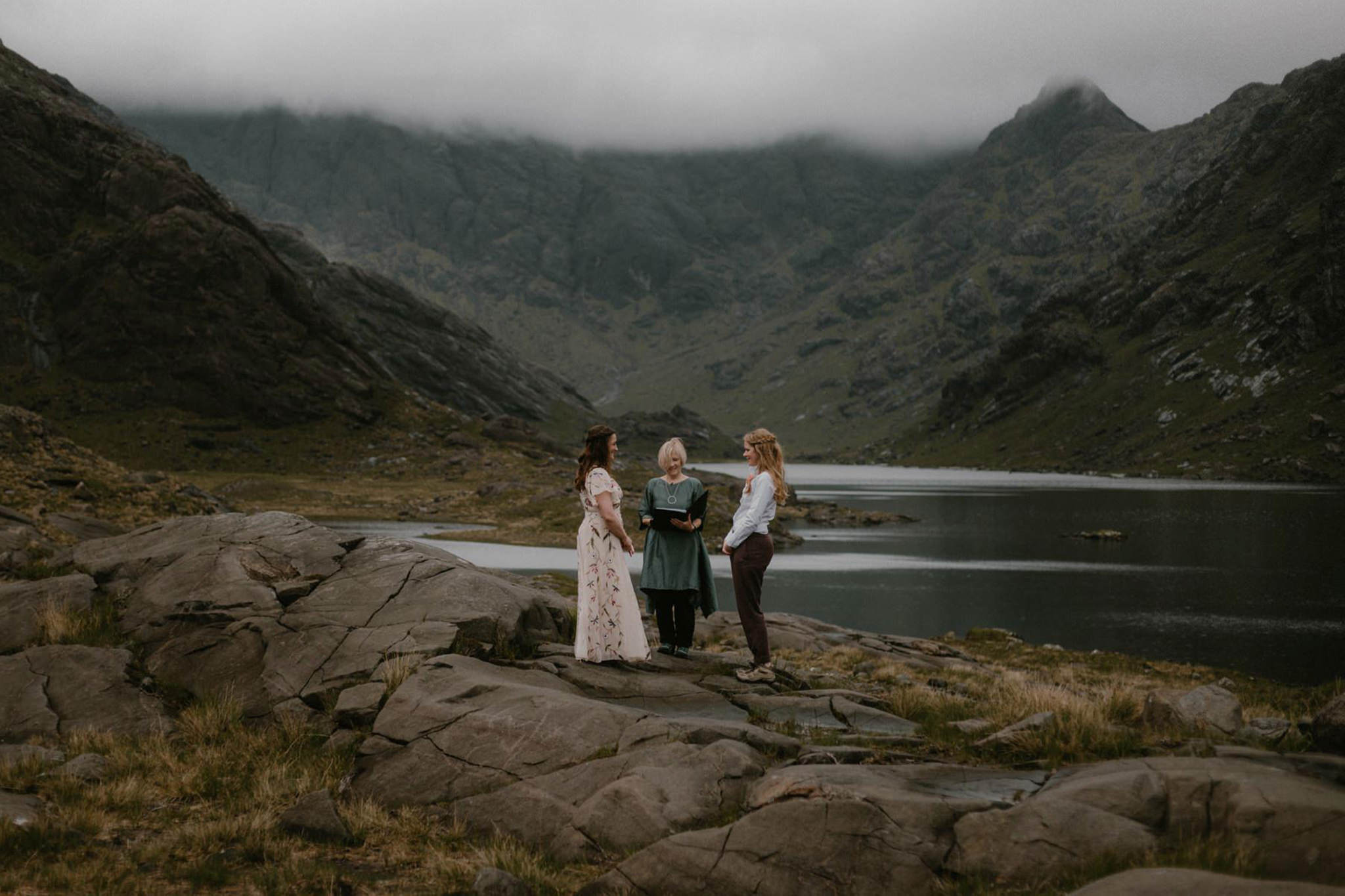 Chrissie & Kim’s adventurous elopement wedding at Loch Coruisk on the Scottish Isle of Skye was full of laughter and romance. It was such an honour to spend the day celebrating their love and exploring this stunning corner of Scotland together.

With its green glens, rugged mountains and shimmering lochs, the Isle of Skye in Scotland has to be one of the most romantic destinations in the whole of Europe for an adventurous elopement wedding. The weather here is dramatic and changeable – making for an incredible, mystical atmosphere. The whole place exudes an ethereal quality; it’s definitely the perfect elopement location for nature-loving, outdoorsy couples who love the drama of the mountains and want a spectacular location for an outdoor elopement wedding ceremony.

Seeking to start their married life as they meant to go on — with an adventure — and avoid all the stresses of a large wedding back home in Wales, Chrissie and Kim chose to elope in Scotland, where they could be true to themselves and get married, free from distractions, and surrounded by nothing but ferns, moody skies and a few curious sheep. Read on for the full story of their incredible Isle of Skye elopement at Loch Coruisk.

Kim’s mother had written a letter for her to read on the morning of their elopement day. Half of it was written to Kim, expressing her love and pride in the amazing woman she had become. Half of it was written to Chrissie, expressing her gratitude that Kim had found such a wonderful friend, adventure partner and soulmate to spend the rest of her life with. It was so moving – we shed a tear behind our cameras! Inviting your family to write a letter or card to open on the day of your wedding day is a lovely way to include them in your elopement; they can be there in spirit, if not in person. You can also write one for them, too, if you like!

The spectacular journey by boat from Elgol to Loch Coruisk is very much part of the adventure. Look out for the seals that bask on the rock near the bay.

“When we got engaged, we initially wrote a huge guest list (which reached nearly 150 people!), planned extravagant details and ideas. We looked at Pinterest a lot. We even went to a wedding fair, but we had never felt so out of place! The cost of things and the commercialisation didn’t quite sit right with us. We just wanted to be wife and wife.

We then delved into the world of Instagram and found The Caryls Photography. We realised that we could be married just the two of us, in the great outdoors and a super-secluded place. We were committing to a lifetime of adventure, so it felt fitting to officially become wife and wife whilst on a huge adventure on the Isle of Skye in Scotland! We also loved the fact that our elopement was also our honeymoon at the same time.” – Chrissie & Kim

“We particularly wanted to tell our loved ones that we were planning an elopement wedding in Scotland – so that they knew what was happening. We aren’t a couple who do things traditionally, so most people weren’t surprised! My parents were really happy for us and supported our decision. My sister specifically said she admired our bravery and was proud of how we have truly listened to our hearts which was so lovely to hear.

The one thing our families did ask for was some sort of event to bring the two families together, so we arranged a gathering in Germany, where Kim is from, a few weeks after we were married.

We are so glad that we chose an elopement wedding. But because we eloped, we didn’t expect such kindness from our friends and family, but we were blown away! When we arrived home, the house was full of cards and thoughtful gifts which was really touching.

It’s coming up to our year anniversary, and we can’t wait to look through all the photographs again and to mark the occasion by getting outside together.” – Chrissie & Kim

After an afternoon spent exploring the island, we headed back to Coruisk House – where a roaring fire and a warm welcome awaited us. There was time for a quick game of cards before enjoying a delicious, locally sourced dinner. Then we headed down to Elgol – to watch the sunset over the Cuillin Mountains. A truly spectacular end to an incredibly meaningful and special elopement wedding adventure!

If you feel inspired by Chrissie and Kim’s Scottish elopement adventure, and would like some ideas and inspiration for planning an adventurous elopement wedding yourself, do get in touch! We love to help couples to create a unique and special elopement day.

Such a breathtaking Scottish Isle of Skye moments…I love Scotland

Beautiful elopement!!! Love how the images capture the way the day felt. Those low clouds are to die for! Gorgeous!

These are amazing! What a beautiful elopement wedding. Scotland is always amazing – but the landscapes and moody backdrops on Skye are breath-taking!

Such beautiful images. Love the story-telling! An Isle of Skye elopement would be such a dream!

Wow – so stunning! The Isle of Skye looks like such an incredible location for an adventurous elopement wedding.

Oh, this is one of my favourite places on earth and the photos you captured with these two beautiful souls are just amazing! And love, love, love the moody colour tones!

WOW these are stunning!!

Each of these images absolutely took my breath away. I felt like I was IN Scotland! Congrats to these two beautiful ladies!

I love the moodiness you have in all of your images! You are such a good storyteller,and I love how it reflects where you shoot!

WOW WOW WOW! No words to describe how beautiful these are!

Wedding planning during Covid-19: what are our options?