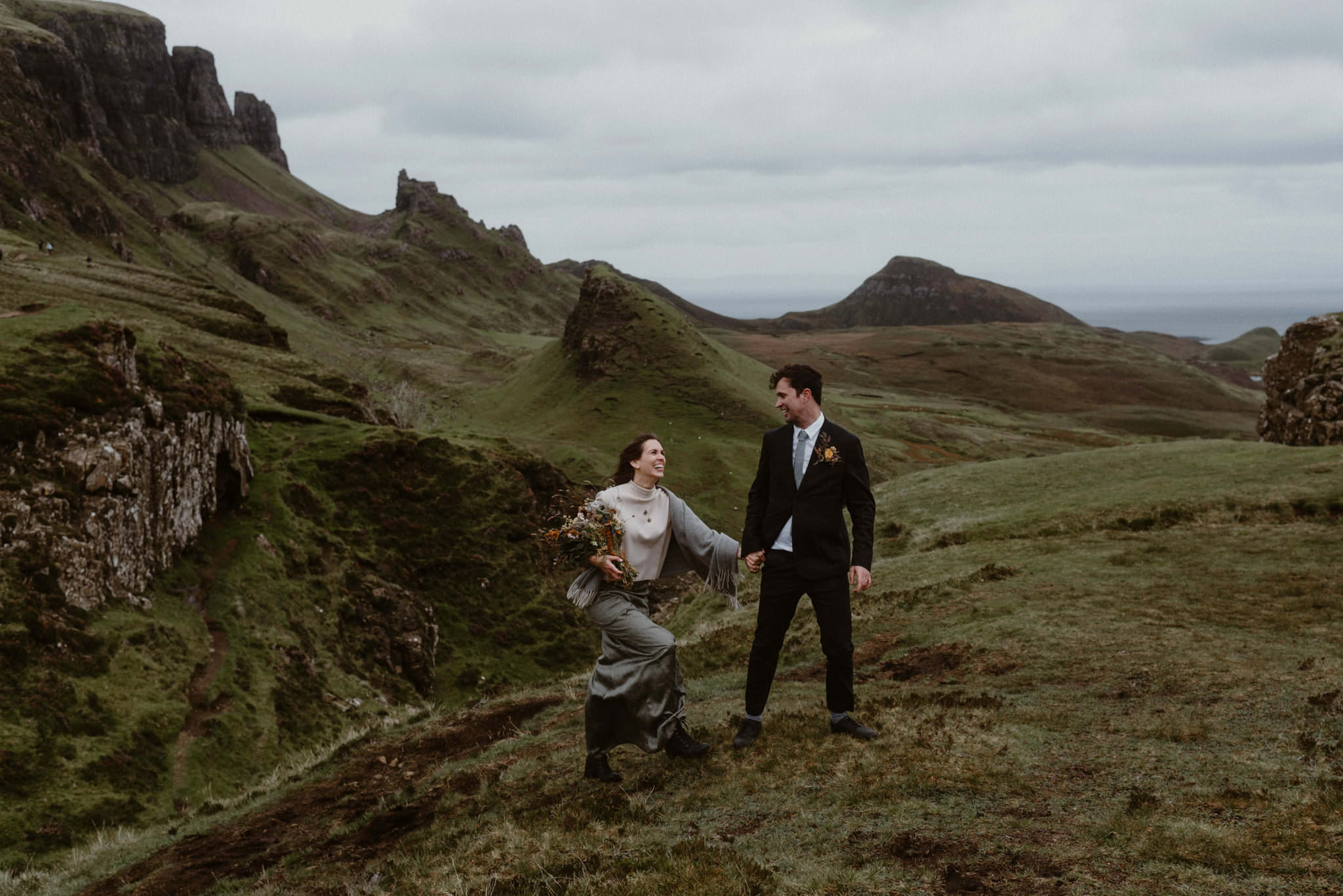 Having been engaged for a while, Ruth & Barry had wrestled with the idea of a more traditional wedding before coming to the conclusion that it just didn’t feel right for them. From the moment they got in touch, telling us about their plans to elope in Scotland, we were super-excited to be part of their adventure! The idea was to have an outdoor wedding on Skye, as part of an awesome Scottish road trip around part of the North Coast 500—the route, organised by Barry (an architect) cunningly took-in some of Scotland’s finest architectural highlights!

For their elopement day itself, they chose to stay at the secluded Coruisk House—a cosy boutique hotel in Elgol. Not only is it an incredibly peaceful location, it also boasts some of the best food on Skye—if not Scotland! Ruth loved the idea of holding their elopement ceremony against the rugged backdrop of the Quiraing. As we shoot elopements on Skye quite regularly, we knew that this is a popular tourist spot (so possibly not the quiet and intimate elopement location that Ruth was envisaging!) But a location recce to the Quiraing few months prior to their wedding day allowed us to find a secluded spot away from the crowds.

The weather on Skye is notoriously changeable—the adage of experiencing ‘four seasons in one day’ is certainly true here—and the forecast for their wedding day was looking quite wet and wild. But in the end, the day dawned peacefully and after a delicious breakfast Ruth and Barry began their preparations. Ruth chose to wear a handmade wedding dress, with stunning flowers by Wild Gorse. They chose to get ready separately, then have a romantic ‘first look’ before they headed out to their ceremony location.

With elopements, we always feel that the journey is part of the fun of the day. As we made our way along a narrow path toward the Quiraing the incredible vistas opened up before us and it felt incredibly awe-inspiring. You would be hard-pushed to find a more spectacular setting for a wedding ceremony! Ruth and Barry had put a lot of thought into their unique and personal vows, which made their ceremony very special. Their cute pup, Babs, was very much involved in the action (can we just mention how much we love dogs at weddings!)

The weather gods were with us: no sooner had we descended from the Quiraing than the forecasted storm broke and the heavens opened! Fortunately, we were heading back to the warmth and comfort of Coruisk House by this point where a roaring fire and champagne were waiting. Ruth and Barry took a moment to warm-up and read the letters and cards sent by family and friends. Inviting your nearest and dearest to write a letter or a card for you to open on your elopement day can be a really lovely way of including them—giving them an opportunity to express their love, even if they are not physically present.)

After a sumptuous dinner at Coruisk House, we headed out to catch the sunset over the mountains. It was such a romantic end to a special day: a wedding day that Ruth and Barry had done completely their way.

wow these are simply stunning! What a beautiful day, and you documented it all so well! I love the colors of the Isle of Skye!

Your elopement work is already so inspiring but this is so inspiring! Absolutely love how you two capture both the people and the place wherever you are. Those Isle of Skye landscape photos are just as incredible as the elopement photos themselves.

SOOOOO beautiful, you really captured the true essence of who they are. Also, love the pup!!

Ever since going to the UK, the Isle of Skye has been on my list. If it’s anything like your gorgeous photos, I cannot wait to go! Everything about their elopement day is so cohesive, romantic, and truly artistic. Officially obsessed with this Scottish elopement!

WOW! Your attention to detail is so inspiring!! I feel like I’m in another time looking at these images. I love how you captured their entire day. Absolutely stunning images!

wow what a dream! These images are absolutely amazing. I love their dog and the highland cows in the photos. beautiful work

What an incredible set of photos! I love the moment with the highland cows in particular – so special! It looks like it was a truly incredible day and beautifully captured. 🙂

These images are absolutely breathtaking!! And what a cool location– Scotland is on my list! Thanks for the inspiration!! <3

Okay, all of this is incredible, but the Scottish highland cows absolutely made my day. 😍

These images are truly breath-taking! We are so desperate to visit the Isle of Skye. Maybe we will just need to elope there on day…x

Oh wow! This is so stunning. An Isle of Skye elopement is my absolute dream!

Wow this place is a dream! Plus their doggo in the photos, sooo soo cute!!

Apparently, today is officially the most ‘depres

Our October bride Annie is a keen wild swimmer & s

There’s something about the stillness that you g

The last few moments before you step-out to marry

We know there is still so much uncertainty about w